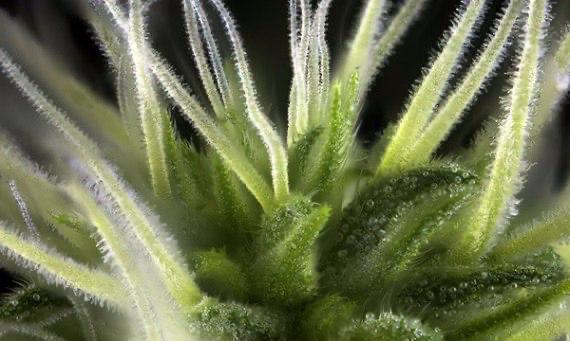 The scent commonly associated with marijuana comes from myrcene, which belongs to the terpenes group. Myrcene is a monoterpene, the simplest compound of the terpene group - natural organic hydrocarbon that is formed by photosynthesis. According to various chemical analysis, it makes up half of all terpenes in any given plant by weight. Terpenes are tiny particles used by plants for communication and pest deterrence, among other things. Terpene profile of each plant is very important, as it responsible for its potency and effects - for example whether it has more calming or stimulating properties. Myrcene is found in hops, bay leaves, parsley, basil and mango, among others. What's the smell like? Musky and spicy with a hint of cloves, earthy.

According to research by Dr. Ethana B. Russo conducted in 2008 Myrcene has significant analgesic properties. Its mechanisms are similar to those of opioid analgesics, but they do not cause addiction. Myrcene can not only relieve pain, but can also get to its root cause. Animal studies have shown that it also has an anti-inflammatory effect.

Myrcene is best known for its relaxing effects which affect both the body and the mind. It can also have a strong sedative and sleep-inducing effect. Herbs containing this terpene are used as sleeping pills.

More research is still necessary in order to explain the beneficial effects of cannabis on our body. As we already know their rich ingredients and amazing properties, we're able to use them in methods most convenient to us.