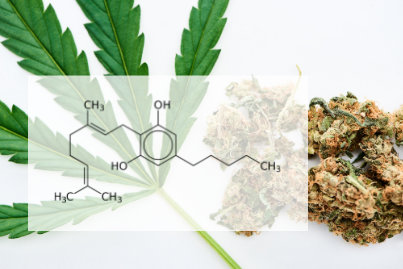 Cannabigerol or CBG is a naturally occurring compound in cannabis that belongs to the phytocannabinoids family, which, except for THC, does not have intoxicating properties. Other compounds in this family, among others, include CBN, CBD and CBC. It is a precursor to other cannabinoids, which is why it has been called "the mother of all cannabinoids". CBG is an intermediate product and its concentration in most varieties of these plants is low.

Plants belonging to the Industrial cannabis  family contain greater amounts of CBG than other varieties  due to the presence of a recessive gene, which in turn is responsible for the presence of a defective enzyme – Synthase. It has a limited ability to convert CBGA (Cannabigerolic Acid) into other cannabinoid acids. As a result, in these cannabis varieties, there is a very high concentration of CBG with a low concentration of THC. In some varieties it does not exceed 0.001%. These varieties are called "CBG accumulating plants".

Due to difficulties with its availability so far, it is still subject to research, which is already very promising. The studies conducted so far show the great potential of this compound and the possibility of its wide pharmacological application. CBG has strong antimicrobial, analgesic, and anti-inflammatory properties, with a stronger effect than those commonly available on the market. So far, CBG is the only known cannabinoid that influences the formation of new nerve cells or neurogenesis.